Skip to content
HomeTrack 31: In the town known as Worcester, MA

For what seemed to be several hours but was probably not even a half an hour, I watched the incoming stream of soldiers trying to get into the factory. The vehicles were still holding the line, but barely.

“Where the fuck are all these people coming from?” I muttered under my breath.

I heard a knock on the door. On the camera, it revealed it to be Eliza. “I’m kind of locked down at the moment,” I said into the intercom. I made sure it was only directed into the speaker outside the door to the security room.

“Good,” Eliza said back into the intercom. “That’s where you need to be. I take it yer ready to push the button?”

“I like it even less than you do,” Eliza said, “but those tanks won’t ‘old forever. Also, I’m worried about the basement. Buncha pipes and conduits leadin’ in, right?”

“Create a detail for that if you want,” I said, “but I’m not too worried about that. We’ve got bigger problems than-”

There was a roar that reminded me of one of my last years in high school. Behind my school, they had been building a replacement for my old crappy school and part of that process involved breaking ground using explosives. Those explosives, up until recently, had been the second-most powerful weapons I had experienced. Only the Teeth’s plasma weaponry had impressed me more than the humble excavation tool that had caused that tarp behind my school to lift up, propelled by literal tons of dirt and rock.

This sound, however, was like someone had dropped dozens of bombs hundreds of times more powerful in rapid succession. The shock wave was so intense that it felt like my heart would burst and I was nearly thrown out of my chair. Ears ringing, I turned back to the monitor to check what had happened.

The exterior cameras facing the areas the tanks had been defending were useless. Either they were displaying an error message, or they were showing an odd swirling gray mist. Upon looking on the ones viewing the rooms where the soldiers were being triaged, I learned it was dust. Dust that was still pouring in, causing everyone who breathed it in to break down and cough. Dust that was sticking to clothes and skin. I wondered what it was from, then realized with horror: it was from the buildings outside the factory that, along with the tanks, had been blocking the advance of the Dragon’s Teeth.

I slammed the button to the intercom for a general announcement. “GET INSIDE!” I yelled. “EVERYONE, GET INSIDE NOW!”

Then, one of the Dragon’s Teeth planes must have flown too low, because all the dust was blown away. There, advancing over rubble that used to be several blocks of city street and methodically killing US Armed Forces stragglers, were what had to be Dragon’s Teeth soldiers. They seemed to be a new type, with a different kind of armor and were moving along in groups of three, with one in front holding a riot shield and two in back using the one in front as cover.

I frowned. The weapons they were holding didn’t seem to be the typical Pilum bullpup assault rifle or Gladius SMG used by the mainline Legionnaires. I zoomed in. “The bastards…” I muttered as I saw some reach into a hastily restored Sherman tank to remove a crew member.

They’re using my weapons, I thought in shock. The bastards are in my country, killing my fellow citizens with weapons I made.

Between the shock of seeing my weapons in the hands of the enemy and disorientation from the bomb, I was too stunned to do anything. I watched as the few remaining US soldiers outside the factory capable of doing anything started to fire at the advancing Teeth. Their fire did very little, with many bullets bouncing off the ballistic shields and sometimes even the helmets of the advancing Teeth. Many more shots missed. It was a miracle, in my opinion, that any of the US soldiers had hit them.

The Dragon’s Teeth, meanwhile, were moving with inhuman speed and returning fire with equally impressive accuracy. In the rare circumstances that one of them was dropped by the fire from the US soldiers, his buddies would step over his body and continue onwards. I suddenly realized that the soldiers still outside the factory were screwed, and the Dragon’s Teeth were entering optimum range. I pushed the button.

The doors slammed shut. A soldier had been trying to get through the pedestrian entrance and was crushed by the iron blast door. Their buddy just ahead turned around and began screaming causing other soldiers to turn around. On the vehicle entrance, some soldiers had been dragging in wounded. Some were still outside, and began banging on the door only to be cut down by Dragon’s Teeth fire or to get down. I was unsure which. One soldier who had been dragged by his or her fellows (the body armor most of them were wearing and shitty image quality made telling gender hard) had their legs caught by the falling door. The people dragging the wounded soldier in were now trying to free them.

Meanwhile, the auto-turrets had come up. The perimeter around the doors had mostly contracted into the turret’s minimum range. Mostly. A few soldiers outside that small bubble were instantly chewed up by the dumb devices.

Luckily, the Dragon’s Teeth took the brunt of the robotic wrath. A short burst into Dragon’s Teeth clone with a riot shield would seemingly penetrate the shield, its wielder, and, if the burst was long enough, the armor of the other two Teeth in the triad.

I looked out into the hellish landscape outside the factory that I had helped to create in several ways. Buried, maimed, and dead littered all the debris from the bombs. The ringing in my ears from the bombs was slowly dying away and I could hear footsteps and voices outside the door of the security room as people began running to firing positions inside the factory walls. In the cameras looking inside the factory, I could see soldiers and gangsters running to firing positions, checking for masks, or trying to find a place to put the dead and wounded so they at least wouldn’t get trampled. Thanks to what I’m convinced was a Deet carpet-bombing, I think there were a few more potential murder holes than there would have been otherwise.

I realized that the explosion had shaken a huge amount of dust loose from the tiles above me. I brushed myself off, which irritated my burned skin. I then began to wonder what else I was missing. My chest was still aching from the blasts, and I wondered how anyone was still moving.

Due to a combination of finally being able to catch my breath and the ringing in my ears dying down, I finally noticed that some of the thumping was coming from the door to my security room. I looked through the camera just in time to see Captain Castle get slammed against the wall by Eliza.

“Hey, Eric,” I said into the intercom, “Eliza’s having a dispute with one of our guests. Can I have some assistance here?” There was another thump as Castle slammed Eliza back into the door to the security room, and another when he headbutted her. Seeing as there was no way anyone would have been able to make out that what with the explosions and gunfire, I added, “Can you please hurry?”

Castle got Eliza into a headlock somehow, then hammered on the button. “Jacobs, you piece of shit!” he yelled. “Open the fucking gate or I break her GAH!”

Eliza had simultaneously bit Castle’s arm and brought her foot down on the Captain’s shin, causing it to bend where a human leg definitely should not be bending. She then ripped out of his grasp and threw him back against the door with a thud.

At that point, I genuinely expected him to go down. Instead, from the side I could see, three bone claws popped out of his hand and he somehow lunged towards Eliza. In response, Eliza popped her own claws. Shit, I thought. He’s a Lupine as well. This will only end badly.

There was a brief flurry of violence in which I couldn’t see anything. I could see the results. Both combatants had been flung back against their respective walls, Eliza bleeding from the face and Castle clutching his stomach with one hand. Eliza yelled something, but I could barely make out a sound through the reinforced wall and the gunfire.

Castle ignored her and took a step forwards. Then, from the blurry camera feed, I saw him stumble back and I could hear several gunshots striking metal. Whoever was firing at him quickly shifted aim and the result was a massive red hole in his forehead.

Eliza slumped to the ground as Doc and Eric came into view. Eric went over to Eliza while Doc kept his gun trained on Castle’s corpse. Satisfied that the threat was over, I wheeled to the door and began the process of opening it. When it opened, something squishy fell on my legs. It was Captain Castle’s head. I looked down. His stomach was ripped to shreds.

“I’m sorry, Nate,” Eliza said, her eyes filled with tears. Well, eye. One of them was completely gouged out from Castle’s swipe. “I tried to get ‘im to reason wi’ me an’ then ‘e took a swing an’ things just snowballed. I didn’t…! I didn’t mean…!”

I knew. It wasn’t her fault. Two Lupines, one trying to enter the room where the person who had killed all his men was sitting, the other, who wanted to defend said person in the room. I personally was surprised that Doc had arrived in time to end the fight.

The Monk, Ray-Gun and Cross had joined me, Eliza, Eric and Doc. I only barely noticed them. “We have to do something,” I said. “We have to hide the body. How…?”

Cross took  off his jacket and threw it over Castle’s head. “We’re putting bodies out in the back. Most people aren’t back there anyway. Plus he’s just one more body. Easiest stiff disposal job I ever did. You and Eliza just go back in there. Is there a cleaning cupboard?” He then looked down the hall. “There it is. You got a key?”

Once Eliza was shepherded into the room, I turned my attention back to monitoring the hell I had created. 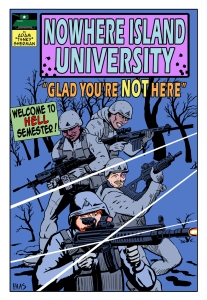